Ilex glabra, inkberry holly, is a upright native evergreen multistem shrub. Inkberry holly blooms spring around June. It is one of the 3 common species of holly in NJ ; the other two are Ilex americana (American holly), and Ilex verticillata (winterberry holly).

The inconspicuous flowers are greenish white and are about a quarter inch across and form in spring. They form at the leaf axils along new branches. The flowers have 5-8 petals

The inkberry holly female flowers usually form singly at the leaf axils along the branch.

This flower has 7 petals and 7 sterile stamens. The stamens are modified and non-functional. The green ovary is large and is topped with broad large stigma that is fertile. No style.

Female flower. There is no apparent style. 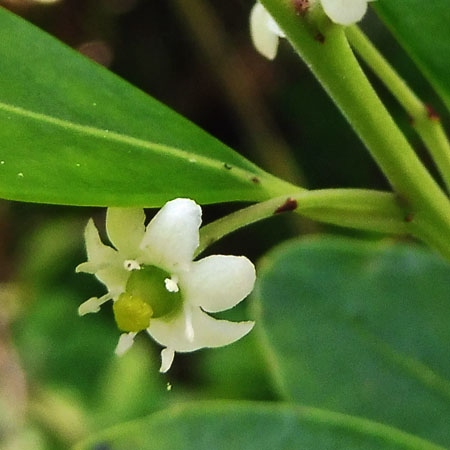 In the photo, the male flower has 6 petals and 6 fertile stamens. The anthers are shriveled.

This flower has 6 petals and 6 stamens. These stamens are finished and the modified non-fertile pistil is seen. There is no stigma and the ovary is elongated forming a point at the top.

If the female flowers get pollinated, black, berry-like drupes will form in the fall, about 1/3 inch in diameter, and persist throughout winter into early spring unless found by local birds.

Leaves: Inkberry holly leaves are simple, alternate, leathery, evergreen, and spineless. The upper surface is shiny and dark green while the lower surface is lighter green and dull. The leaves are around 1 to 2 inches long and .33 to .5 inches wide. Shapewise, the leaves are elliptic (widest at the middle) to obovate (widest above the middle). The margins (edges) are smooth but with a few notches on each side of the leaf tip with a few teeth.

Stem/Bark: Young stems are yellowish-green in color (above photo) and older stems have smooth gray bark (photo below).

Plant: Inkberry holly is a relatively slow growing evergreen shrub that grows to about 5- 8 feet tall. It sometimes will form clumps with root suckers