Home  Resources Gardener News reprints: The Other Other Holly

This article by Hubert Ling (NPSNJ horticulture) was published in Gardener's News without the photos. He is a regular contributing writer to Gardener's News. Photos by H & M Ling.

The Other Other Holly 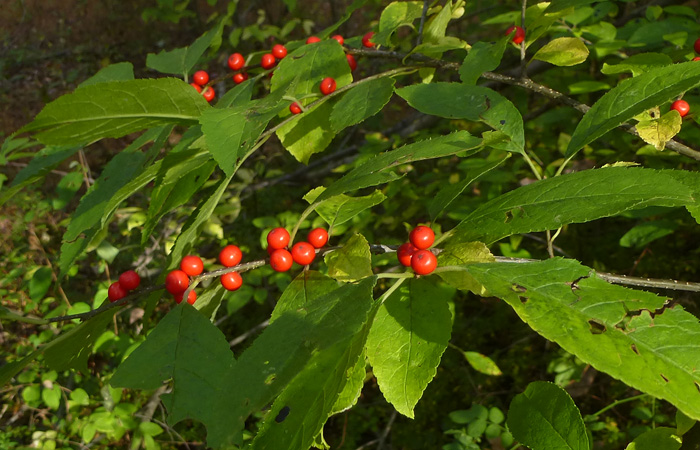 All three hollies are very popular cultivated plants and are widely available in almost any garden center. However, finding the straight species is much more difficult since there are so many ‘improved’ cultivars. Why select the old fashioned straight species over a prettier cultivar? Well the straight species from NJ has been naturally selected for overall fitness over thousands of years of to thrive in NJ. The cultivars have been selected by horticulturalists for compact shape, high berry production, and overall eye-appeal. If you want a plant guaranteed to enhance the environment with minimum upkeep select a straight species native plant.

Winterberry holly, Ilex verticillata , is a woody perennial plant which generally grows to 6-10’ or occasionally higher. However, you can keep it to the lower height with a little bit of careful pruning. Every fall the mature female plants stand out in your garden with a brilliant display of bright red berries which persist until spring, hence the name winterberry. Even the straight species is spectacular since this deciduous plant loses its leaves just when the ¼” diameter berries start to take on their vivid color in October.

Winterberry is found in every state east of the Mississippi and Eastern Canada. In NJ it is found in every county and is a relatively common plant. Winterberry holly grows best in moist, acidic, rich soil in a semi-shady area. However, it tolerates clay, sand, dry soil, full sun, heat, drought, soil compaction, and air pollution. This holly does not do well in neutral or basic soil. Dense thickets of winterberry holly can be found in wetlands but individual specimens are also naturally found in dry sandy areas or in grasslands.

Male and female flowers are found on different plants. If you want the red berries you will have to plant several immature bushes and hope for a female or buy a more expensive adult shrub with the bright red berries already present. Only one male plant is needed to pollinate up to 12 female plants.

Propagation of winterberry may be done by seed but the seeds must be planted as soon as they are ripe or they go into dormancy and may stay there for several years. Propagation is better insured if rooted suckers are removed from the parent plant. However, remember plants produced vegetatively from suckers are genetically identical to their parent and thus you have done nothing to increase genetic diversity in your plants and genetic diversity is desirable when disease strikes.

Winterberry holly is an animal magnet. Although the yellow-green flowers are very small, about 1/8th inch, this plant makes up for that fact by bearing a multitude of flowers and on warm sunny days in early spring your plant is very literally buzzing with activity. The plant is a larval host for Henry’s Elfin butterfly and 48 species of birds, including robins and cedar waxwings, utilize the fruit. The foliage is also sometimes utilized by deer and rabbit. Winterberry is low maintenance and has no particular insect or disease problems.

Our Native Americans especially the Potawatomi used winterberry holly medicinally and it was known to natives as the ‘fever bush’. The Iroquois also used the bark as an antiseptic. However, you should not experiment with this plant since safe, effective alternatives are available and winterberry is considered mildly toxic and can cause nausea and low blood pressure.

Your winter garden need not be devoid of interest. All three hollies can add sparkle to an otherwise drab yard. Bright red and green can be supplied by American holly, black and green by inkberry holly, and bright red standing alone by winterberry holly; these hollies deserve a spot to shine.